Seizing the Day and Meetings Without Walls

In early March this year I wrote a coaching blog post, just as I’d intended to do when I first launched Corum Coaching back in January and it contained what I believed at the time to be insightful and useful information – the kind of information that people might enjoy, learn from and might possibly even share with others.

I was poised to press ‘publish’, when I received some unexpected and desperately sad news that Ian Findlay CBE, CEO of Paths for All, chair of ACOSVO and generally wonderful human being had passed away very suddenly.

In that moment, I felt that my musings – however insightful at the time of writing – lost all meaning and relevance. Rather than share it with the world, I pressed ‘delete’.

You see, not long after I had published my previous blog post, Ian had emailed me to say that he loved my writing and ‘authenticity’ and described it as a ‘rare skill’ – it was absolutely the kind of feedback that anyone who puts their ramblings out there for public consumption would be thrilled to receive.

This is the first blog post I’ve been motivated to write since then and I’m pleased to say that I think I’ve got my mojo back.

I won’t for a moment pretend that I knew Ian as well as so many others in the third sector in Scotland, who were all – and still are feeling his passing much more profoundly and deeper than I.

I had however had the privilege of being part of an online peer support group along with him and a small, fabulous group of charity leaders that was initiated by Kinharvie in the wake of the Covid-19 pandemic.

This space was invaluable for me in 2020 and has reminded me so often of the power of peer relationships, particularly during such an unprecedented (is there another word for what we’ve been living through?) and challenging time. The role of CEO can be a very lonely place, which is why organisations like ACOSVO fulfil such an important role in bringing leaders together, facilitating conversations, focussing on wellbeing and providing mentoring support for new CEOs. As a member of ACOSVO, I benefitted from this support enormously and I’d also like to think that I’ve also given back by making my own contribution to this crucial network of amazing people.

The CEO peer support sessions came at a critical time for me and together we created a safe, unique and very special place. There is something so important about taking time away from everything else to listen to each other, to offer support and encouragement. We challenge each other and we trust each other and we laugh together. A lot. Probably more than anyone looking in might find acceptable but it’s been a reminder to never underestimate the power of laughter or being able to share it with others.

Ian’s presence in this space was always welcome and comforting. His wisdom and insight were remarkable, understated and delivered in a way that persuaded us that all would be well. This was especially reassuring when I found myself unexpectedly facing redundancy.

We lived on opposite sides of the Ochil Hills and during the winter lockdown we had almost daily Twitter exchanges regarding our respective outdoor pursuits. One of the last of these involved me telling him he was ‘hardcore’ as he’d taken his bike out in the snow. His response was that I was in fact the one who was ‘hardcore’ since I’d had to take to smashing my way through the ice to go swimming in my local lochan. I must say I did agree with him on this.

When Ian passed I felt a sense of profound sadness that evolved into thoughts about the future, about living well and making the most of the time we do have. The phrase ‘carpe diem’ however cliched and overused, had never felt more resonant than it did at that time.

As lockdown started to ease, and the temperature began to rise, I found myself spending more time wild swimming with larger groups of women. On one occasion I had six ‘newbies’ out with me and each woman had their own reasons for deciding to ‘take the plunge’. From surviving cancer, to living with MS and other chronic health conditions, to feeling isolated and anxious – each had a story to tell and each hoped that wild swimming and the camaraderie and support of other women would help make a positive difference.

The following day I chatted to my good friend and wild swimming buddy, Heather, who was also made redundant in 2020, about my experience and it transpired she’d had a similar one that very day. We each felt compelled to do what we could to take our ‘wee’ wild swimming group to the next level, to reach more women and girls and encouraging them to become healthier and more confident.

We did in fact seize the day and Wild Wimmin Ltd was ‘born’ a few weeks later. Our business is mission-driven and we have health and wellbeing and female empowerment at the heart of the company. We have planned a number of wild swimming retreats in stunning locations in Scotland. Heather and I became qualified open water swimming coaches and we also have a qualification in aquatic safety management. A world away from our previous lives and unbelievably fulfilling and exciting all at once. When we are in a position to do so, we plan to channel funds into a charitable foundation to ensure that there are no barriers, especially financial, to ‘wimmin’ and ‘wee wimmin’ in accessing outdoor activities and wellness retreats. We are already working in partnership with our local authority and in talks with others around delivering open water safety and coaching sessions in schools. We’re also discussing the prospect of using wild swimming as part of a social prescribing pilot.

Several weeks ago, the team at ACOSVO announced that they were changing the name of their Active Leaders programme, to the ‘Ian Findlay Active Leaders Programme’ as a perfectly fitting memorial to their former chair. I knew immediately what I needed to do and within a few minutes I had made a plan with ACOSVO CEO Pat Armstrong for Wild Wimmin to deliver a wild swimming session as part of the programme.

And that’s exactly what we did. On a Wednesday afternoon in August on what must have been the darkest, rainiest day of the summer, Heather and I took four intrepid charity leaders out for a wild swimming experience in Loch Lubnaig as part of the Ian Findlay Active Leaders Programme. 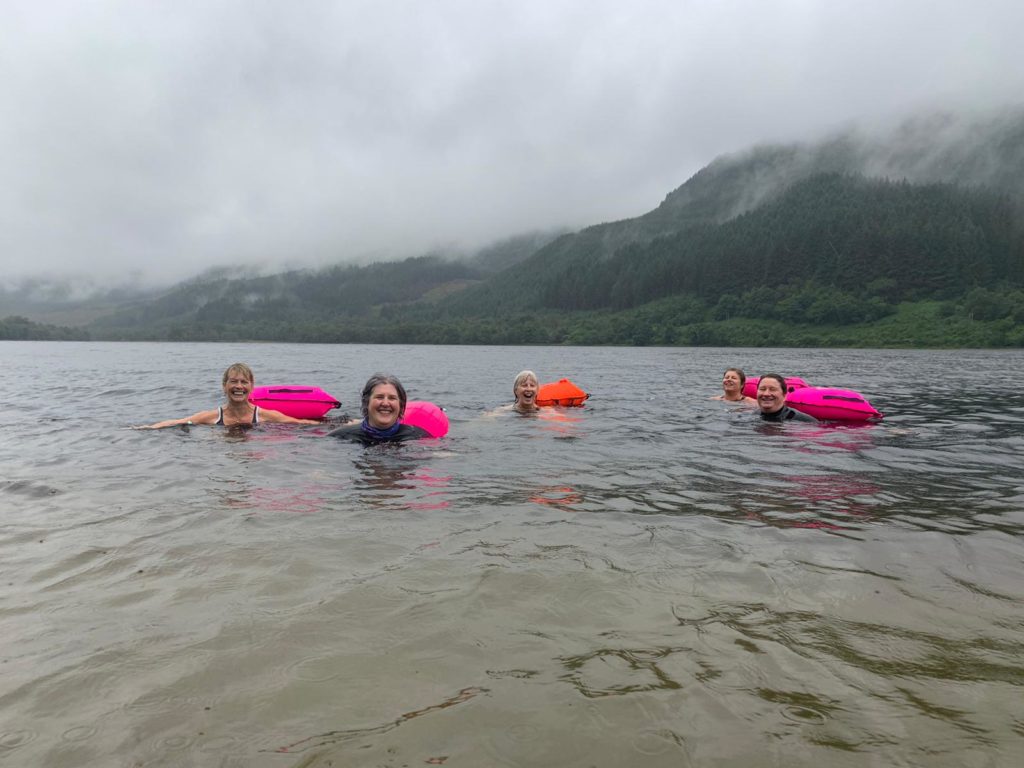 Prior to publishing, I shared this blog post with Meg Wright who was part of the adventurous tribe of Wild Wimmin who braved the cold water that dreich afternoon. Meg’s observations have since been included as I believe they are absolutely worth sharing.

You see, the Ian Findlay Active Leaders Programme is all about providing peer support and networking for senior leaders away from offices, meeting rooms and typical ‘work-like’ environments. It encourages physical activity, outside in the fresh air, surrounded by nature and trying new things. Participants have reported feeling energised and recharged, making connections and sharing/solving issues with peers at the same time. A number of charity leaders have shared with their reluctance to name it for what it is, opting instead to put ‘networking event’ in shared online diaries or taking annual leave or TOIL to participate. Someone had mentioned to Meg in the passing that a programme like Active Leaders surely couldn’t be classed as ‘working’ and surely more of a ‘jolly’ than anything else.

Over the last 18 months, charity leaders have, like so many, gone above and beyond to keep their organisations going under the most extremely challenging and lonely circumstances. Many have often done this at an enormous cost to themselves in terms of personal wellbeing. So, if a bunch of CEOs who do amazing work in Scottish Charities want to hang out with each other in a freezing Loch, climb a Munro or fall off Paddleboards that also supports them to connect, recharge and refresh I say let them do it. Often.

Meg talks about the benefits of ‘meetings without walls’ – why are offices and Zoom the only places some people feel we are legitimately ‘permitted’ to connect with each other?

I’m now a qualified open water swimming coach and after reflecting on this, I am seriously considering offering leadership coaching sessions in open water to anyone who wants to explore issues they are facing or want some support to reach their potential.

As for our afternoon with the ACOSVO members, it was a brilliant experience for all of us. Comfort zones stretched, new connections made, others rekindled, lots of laughter, cake and of course time taken to reminisce about Ian. We agreed that he would absolutely approve of our shenanigans.

Indeed, he may even consider us to be ‘hardcore’.

If you want to know more about the services offered by Corum Coaching, please contact us by completing the form and we will be in touch soon.

You can find out more about which cookies we are using or switch them off in settings.

This website uses cookies so that we can provide you with the best user experience possible. Cookie information is stored in your browser and performs functions such as recognising you when you return to our website and helping our team to understand which sections of the website you find most interesting and useful.

Strictly Necessary Cookie should be enabled at all times so that we can save your preferences for cookie settings.

If you disable this cookie, we will not be able to save your preferences. This means that every time you visit this website you will need to enable or disable cookies again.

This website uses Google Analytics to collect anonymous information such as the number of visitors to the site, and the most popular pages.

Please enable Strictly Necessary Cookies first so that we can save your preferences!